In connection to the 13th anniversary of the publishing of Liber Falxifer I  The Book of the Left Handed Reaper and as part of the Sanctuary of the Black Light series of Current 2182 related Ikons we are on this Friday the 13th of May 2022 pleased to present the latest manifestation of the Qayinite Visions of N.A-A.218.

The Liber Falxifer 13th Anniversary Ikon depicts the special cover which was exclusively created for the third edition of the first Liber Falxifer book and portrays the Revealed Form of Qayin as the Crowned Lord of Death, replacing the original cover image that was part of the initial Usurpation and Possession stage of the Unfolding of the 182 Current, during which the subverted iconography of Christ the Redeemer was elevated anew through the Grace of the True Messiah/358.

That original form became replaced by the more Purely Qayinite aspect which 13 years later emerged through it, in a manner similar to how the Serpent shed its skin, taking the form of the Ikon that now depicts Qayin in His Unmasked Glory, as the First Saint and Lord of Death. It is worth of note that it even within more common qabalistic lore is stated that Qayin after the murder of Abel served as the Angel of Death for 130 years, before passing that mantle to another one within His own Sacred Bloodline of the Serpent/358.

The observance of the Transformative 13 Years Cycle is as such something well-grounded within all forms of significant Qayinite Mythos, but most importantly something which over and over again has been confirmed as operatively valid within our own Necrosophic Tradition embodying the 218/182/2182 Current that this work belongs to.

It is as such most auspicious to celebrate the 13th anniversary with this Evolved Form of our Masters Ikon, depicting Him in the aspect through which He now has been made known through the already manifested Liber Falxifer I, II and III, and which shall continue to Come Forth and expand through the forthcoming Liber Falxifer IV, V, VI and VII.

This Revealed Aspect of Qayin the Crowned Lord of Death depicts Him in the same familiar pose as earlier, with His arms stretched out as if to embrace the world, while also assuming the form of the Holy Cross, through which the Forces of the Other Side could cross over into this side of existence. This Cross of Qayin is also the Liminal Point of Spirit, through which the material existence and its illusory forms of cosmic life and death are transcended through the Maveth Principal of K-Ain, of which Qayin (and His Bride) was the First Messianic/Redemptive Manifestation.

Our Qayin is thus a Harbinger of Unfated Death, cutting the threads of Demiurgic Heimarmene with the Reaping Blade of the Other God (the Elohim Acherim Azerate opposed to the Demiurgic Impulse), held symbolic in His Left Hand, indicating Qayin as being aligned with the Left and Thoughtless Emanations of the Ain Soph.

In this depiction of our Master we now also have the thus far disclosed symbolic Investitures of Nod clearly depicted in the form of His Crown of Thorns, the Pesha X-Brand, the Crown of (Gilded) Bones and the Halo of Black Light/Fire. These are very significant details when it comes to the talismanic alignment with the essence disclosed within the Liber Falxifer III systematisation of the Initiatic Becoming attainable through those Four Lines of Nod.

The 7 Keys hanging at the waist of Saint Qayin are also new additions emphasising not only His Seven Principal Keys of Power and the virtues related for example to His Seven Key Sigils, but are more esoterically connected to the expansion of the Cardinal Points of Nod, which now from the Four Principal Lines have expanded to the Revealing of the Seven Lines, adding 3 liminal and reflective ones to the mentioned fundamental 4. The Seven Keys of Qayin are thus also the symbols of the empowerments that He holds and can dispense as related to the Totality of Nod, while also connecting to the Seven Gates opening up to the Other Side and the Keys to the Seventh Qlipha of K-Ain.

The Raven upon the shoulder of Qayin, positioned diagonally to the Scorpion on the ground, is here an emphasised representative of the Qliphothic forces of the Oreb Zaraq/Oreb Saraph and thus the transcendentally immanent presence of K-Ain, who is the Baal of the Qlipha of the Burning Ravens of Dispersion and Death. The ravens pertain to all aspects of the Path of Qayin and those that would Become in His Footsteps, as they were present in Akeldama before it was Watered Red, they instructed in the establishing of Gulgaltha through the First Burial, they represent the Lawlessness of the Pesha-Impulse through all of their deeds and embody thus the Sitra Achra and specifically the Qlipha of K-Ain, by being to the Elohim Acherim what the white dove is to the Demiurge YHVH.

The mentioned scorpion on the ground, being within our work the ever present totemic representative of the most fundamental mysteries related to the emanation of the letter Nun of K-Ain, as manifesting within that same letter of the name of Qayin, is here reinforced in its position and made firmer still. This scorpion will in the forthcoming Liber Falxifer books become fully explained and have its central and true role within our Current 2182 revealed, but until then it suffice to underline its role as the Harbinger of the Sting of Death and Rebirth/Awakening, as a totemic avatar of the final letter of the K-Ainic Tetragrammaton and a Spearhead of the Host of His Seraphim.

As pertaining to Spears and Spearheads, being weapons and symbols esoterically connected to Qayin, based both upon possible etymology of His name and His exalting usurpation of certain deific forms, we see that He now in His right hand holds a Spear that upon its bladed tip bears the marking of the Serpents Eye. The Two-Headed Serpent, representing the mysteries of our Twin-Serpent Thaumithan, coiled around the axis of this spear, discloses it to also embody the K-Ainite Trinity represented by the Trident, which in this Serpentine Form reveal the process through which the Eye of the Blind Dragon is opened. The actual mysteries related to also this symbolic component of the Piercing Eye of the 358 have thus far not been disclosed publically, but shall soon be divulged within the forthcoming Revelations of the Apocalyptic Emissary of K-Ain.

The Skull of Man cracked and burning, representing the Adamic Kelim shattered through the Gnosis of Black Light, is placed upon the ground, to the left side of Master Qayin. This skull with Black Flames of Spirit rising specifically from its Eye Sockets and Cracked Crown, faces the Black Scorpion on the opposite side of the image, which codifies mysteries that first after the Advent of the Emissary of K-Ain have been fully communicated and communicable. This is a symbolic point that had been depicted also in the earlier form of the image, as it carries fundamental meanings unrelated to the usurped forms now transcended. The difference is that the evolved form now has changed so that it besides emphasising the Eyes and the Crown as the points for the Rising of the Black Flames also has the Red Rose of the Holy Mother, representing some of the most central concepts of our Qayinite Tradition, growing and flourishing from inside of it. These, like all of the other mentioned details, may seem as small changes to the uninitiated, but to those that See, Know and Understand there are new disclosed Points for the Attaining of Gnosis within each of them.

Finally the red background is again present and now even more clearly emphasised as a Sea of Blood, from which the Master emerges and through, against and upon which He cast both His Light and Shadow. This is again a reoccurring point of symbolism, which now 13 years after its first envisioning within this context has only been further validated through all confirmations received from Spirit and the attainments of new Gnosis related to it. This Raging Sea of Blood pertains in one aspect to the Aflame Blood of the Qayinite Linage, invasively flooding this world from the Side of the Serpents of the Other Side, while in other aspects connecting back to some of the most important mysteries related to all of the other symbols contained within this Vision embodied as Ikon. The Sea of Blood is also connected to the esoteric concepts of the Red Gates, which only recently, in connection to the celebration of the passed Good Friday, were disclosed to our initiates and some of those others in contact with our Temple. There is as such once again much connected to a seemingly simple symbolic detail. Let those that attain the Eye and Sight of the Great Overseer of our Work witness the Red Thread and follow it to where further revelations await. We hope that this representation of Saint Qayin, requested by many of our supportive students even before we had decided to include it within our Sanctuary of the Black Light series of Enspirited Ikons, benefit those who feel drawn to and come into contact with it.

The actual Theurgic Enlinkment between the printed images and the Spirit, who to us has manifested as our Master and Good Saint Qayin, will as per usual when it comes to the Sanctuary of the Black Light Ikons become established through the Holy Stains of Ensouled Ink, by which each printed copy shall be marked and numbered on the back.

It is recommended that the Faithful Adherents of Qayin recall the Covenant with Death and the Pact with the Sheol by anointing this mentioned marking and numbering on the back of the Ikon with one drop of blood drawn in the name of K-Ain Baal Tzel-Maveth from the middle finger of their left hand, followed by the giving of sacred smoke offerings (either Amiahzatan or some suitable offertory incense blend) directed towards the same Reddened Point (there are here connections to the Red Gates), the giving of the flames of 7 or 13 candles (green, red, white or black) placed around it, the chanting of 49 repetitions of the suitable Formula of Calling selected from the Liber Falxifer Books, followed by heartfelt prayers to the Master, asking for nought but His Guidance, Gnosis and aid in the Vanquishing of the Archonic Forces standing in the way of the accomplishment of His Work.

This process can, when all candles have been consumed, be followed by the framing of the Ikon behind cleansed and dedicated glass and its hanging in some suitable position behind the His altar.

All Glory to Qayin, our Saint of Liberating Death!

The 'Qayin the Crowned Lord of Death' ikons are made available in a ritually marked and consecrated edition of 182 images, each 42cm x 59,4cm in size and printed on high quality glossy paper. 65 euros. 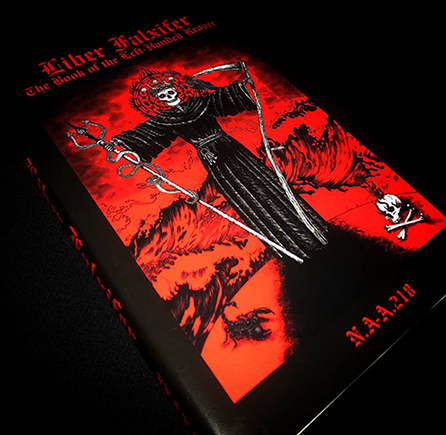